House of Hilton, from Conrad to Paris A Drama of Wealth, Power, and Privilege 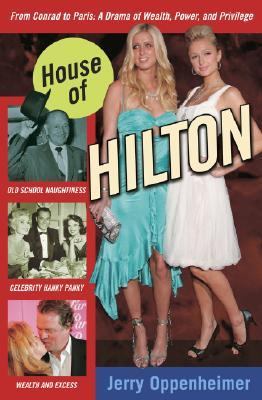 Like many children of the rich and famous, Paris Hilton didn't always get to spend quality time with her parents, especially her mother. A socially ambitious young woman, Kathleen Elizabeth Avanzino Richards Hilton, who had married into the celebrated Hilton Hotel family, was often out and about. With little time on her hands for mothering, she was cavalier about leaving her firstborn with the hired help or with relatives. This was made abundantly clear to Patricia Skipworth Hilton, the first wife of Conrad Hilton's third son, Eric. A Texas beauty who had married into the Hilton family in her late teens, Pat, a mother of four, had become quite close over the years to her sister-in-law and brother-in-law, Marilyn and Barron Hilton, parents of Kathy's husband, Rick. The second of Conrad's three sons, Barron had succeeded the Hilton patriarch as head of the international hotel empire. Pat adored Marilyn, a former cheerleader who herself was a gorgeous teenage bride when she became part of the Hilton family. (The Hilton men, from Conrad on down, were known for taking young'uns for their brides.) Whenever Pat visited Los Angeles from her home in Houston, Marilyn insisted that she stay at their spectacular estate. It was during one of those occasions, when Pat was "in the throes" of one of her many divorce actions in what was a hellish marriage to Eric Hilton--hellish marriages not being an oddity in the Hilton dynasty--that she observed new mother Kathy Hilton in action. "I was there talking with Marilyn when here comes Kathy with Paris, who was nine months old and a great big, fat, pretty baby," Pat Hilton says in her Lone Star State drawl. "Kathy said, 'Meet Star'--she called Paris 'Star' from day one--'Would you like to hold her for a minute?' That was the last I saw Kathy that day. She took off until that evening. I wanted to kill her! She didn't leave any instructions on what time Paris had to be fed. There weren't any diapers. She just left me in the lurch." Furious, Pat vented to Marilyn, who listened sympathetically and knowingly, and rolled her eyes. "Marilyn said, laughing, 'Well, I guess you're it for the day. Kathy does this all the time. She just wants to go out. And she knew you'd take care of the kid.'" When Kathy finally reappeared at day's end, Pat confronted her. "How dare you do this to me?" According to Pat, "Kathy's only reply was, 'Oh, I had to be somewhere. I didn't think you'd mind.' I warned her, 'Never, ever do this to me again!' But it didn't bother her at all. Kathy Hilton's very selfish and very spoiled and very self-centered, and that absolutely carries through to Paris." When Rick and Kathy Hilton traveled and deigned to bring Paris along, they naturally stayed in Hilton hotels, where they demanded special services, including babysitting care for their daughter, despite the fact that Barron Hilton had a strict rule barring Hiltons from getting special treatment or favorable room rates. "When they were in New York, and Paris was just an infant, Kathy and Rick would get one of the women from housekeeping at the New York Hilton to babysit for them," states a Hilton Hotels insider. "They would leave Paris on Friday and not come back for her until late Sunday. It was a known fact that Kathy and Rick liked to party, and when Kathy was a young mother she had no qualms about flaunting the Hilton name and taking advantage of it. She'd let it be known that Rick was going to be 'the next Mr. Hilton,' so hotel executives were afraid to argue with her. None of Barron's [eight] kids were getting a free ride. The only one who ever took advantage was Kathy." Kathy and Rick were prone to show up out of the blue without reservations at a Hilton hotel on a busy weekend and demand the best suite in the house, fine wine and food, and babysitting for Paris. One of their targets was the HilOppenheimer, Jerry is the author of 'House of Hilton, from Conrad to Paris A Drama of Wealth, Power, and Privilege', published 2006 under ISBN 9780307337221 and ISBN 0307337227.