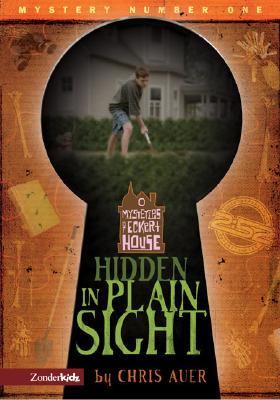 www.zonderkidz.com Hidden in Plain Sight Copyright © 2004 by Chris Auer Requests for information should be addressed to: Zonderkidz, Grand Rapids, Michigan 49530 Library of Congress Cataloging-in-Publication Data Auer, Chris, 1955- Hidden in plain sight / by Chris Auer. p. cm.-(2:52 mysteries of Eckert House ; bk. 1) Summary: Twelve-year-old Dan tries to apply a scripture passage to the events of his life when, while working at an antebellum mansion that serves as a museum, he digs up a skeleton and convinces his cousin and a friend to help him learn who was buried and by whom. ISBN 0-310-70870-2 (softcover) [1. Skeleton-Fiction. 2. Museums-Fiction. 3. Christian life-Fiction. 4. Mystery and detective stories.] I. title. PZ7.A9113Hi 2005 [Fic]-dc22 2003027958 All Scripture quotations, unless otherwise indicated, are taken from the HOLY BIBLE, NEW INTERNATIONAL VERSION ®. Copyright © 1973, 1978, 1984 by International Bible Society. Used by permission of Zondervan. All Rights Reserved. All rights reserved. No part of this publication may be reproduced, stored in a retrieval system, or transmitted in any form or by any means-electronic, mechanical, photocopy, recording, or any other-except for brief quotations in printed reviews, without the prior permission of the publisher. Zonderkidz is a trademark of Zondervan Editor: Amy DeVries Cover design: Jay Smith-Juicebox Designs Interior design: Susan Ambs Art direction: Michelle Lenger and Merit Alderink Printed in the United States of America 05 06 07 /?DCI/ 10 9 8 7 6 5 4 3 2 1 The Collision Whenever Dan Pruitt was unhappy, he'd jump on his skateboard and head over to the west side of town where the hills were steeper and the sidewalks were smoother. Lately, Dan had spent a lot of time on his skateboard. Unhappiness was something new to Dan. Although he was a kid who seldom felt sorry for himself, he had more than a few good reasons to be upset. As he picked up speed on the half-mile-long slope down Filkins Street, he thought about all that had happened since spring. Three months ago, his father, who flew F-18 Tomcats for the Navy, had been sent overseas. Taking off and landing on an aircraft carrier was dangerous enough, but now he was flying missions where the enemy was shooting at him. "Don't worry, Dan," his father had said as he hugged him good-bye, "I'm in God's hands." Dan tried not to worry, but he couldn't help thinking that even people who trust in God get hurt. Or worse. Then, almost as soon as his dad shipped out, Dan's mother announced they were moving to Freemont, Pennsylvania, the town near Pittsburgh where she had grown up. Dan had tried to tell his mother how he'd miss his friends and his school, and how his baseball team needed him, but it didn't make any difference. "Grandpa Mike needs our help," she had replied. Dan really couldn't argue with that. His grandfather had always been one of Dan's favorite people, always ready for an adventure, always telling jokes. "Hey, Dan, I've got a good one for you," Grandpa Mike would say every time he saw him. Then he would throw out one joke after another. "How do you know if you have a tough mosquito? You slap him and he slaps you back! "What was the snail doing on the highway? About one mile a day. "What's green and brown and can kill you if it falls out of a tree? A pool table!" But now Grandpa Mike had difficulty saying anything and rarely came out of his room. He had had a stroke. And Dan didn't know how to help his grandfather. Dan's skateboard started to pick up speed when he got to the new section of sidewalk on Filkins Street. That was good, because the faster he went, the less