Hero of the Underground 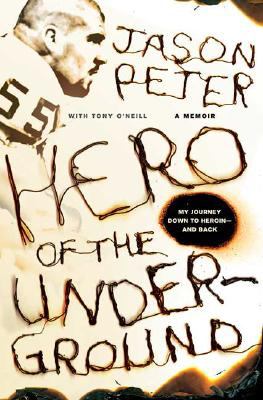 Chapter OneAre You The Guy?I WASN'T AFRAID OF DEATH.How could I be? I lived under death's shadow every day. When you swallow sixty Vicodin, twenty sleeping pills, drink a bottle of vodka, and still survive, a certain sense of invulnerability stays with you. When you continually use drugs with the kind of reckless determination that I did, the limit to how much heroin or crack you can ingest is not defined by dollar amounts but by the amounts your body can withstand without experiencing a seizure or respiratory failure. Yet at the end of every binge, every night of lining up six, seven, eight crack pipes and hitting them one after the otherbam! bam! bam!every night of smoking and snorting bag after bag of heroin... after all of that, when you stillwake upto see the same dirty sky over you as the night before, you start to think that instead of dying, maybe your punishment is to liveto be stuck in this purgatory of self-abuse and misery for an eternity. Sometimes you start to think that death would come as a blessed relief.I found myself contemplating death again. Only this time I wasn't going to leave it to chance. I was going to buy a gun, load the thing, place the barrel in my mouth, and blow my fucking brains out.I sat on my parents' sofa as I pondered this. All I needed was a gun.And allOf my problemsWould beSolved.This had all started the night before. It started in the way that life-shattering events, like suicides or murders, usually begin, with something so small, so meaningless, that it is almost comical.It started with an argument over a television program.Diane had been on my last goddamned nerve, ever since we had driven from my apartment building in New York to my folks' house in New Jersey. They were out of town and had asked me stay there to watch the house and look after the dogs. Our heroin habits were again out of control, so we talked it over and decided that we would take the opportunity to kick dope. The plan was this: We would take a small amount of heroin with us. Week one, I would start to kick. Diane would use enough dope not to get sick so that she would be able to look after me and get me through the worst of the physical symptoms. Then, when I was feeling better, Diane would kick, and I would nurse her back to health. It seemed like a simple, obvious plan.What could possibly go wrong?Doctors will tell you that kicking heroin is like having a severe flu. They will reel off a list of symptoms: runny nose, runny eyes, muscle aches, stomach cramps, fever, the chills, insomnia, diarrhea, nausea... I mean, it doesn't sound like a walk in the park, but it's hardly as bad as having your vertebrae crushed under a 300-pound offensive lineman, right?Well, as any addict can tell you, doctorsfor all of their good intentionsreally don't know shit. Comparing heroin withdrawals to the flu is like comparing getting hit by a truck to falling off a tricycle. I don't care how severe your flu is, it's unlikely that you've seriously considered throwing yourself out of a window, just to make the screaming in your head go away and the agony in your body stop. Heroin withdrawal is the nearest thing to hell that the living ever get to experience.We barricaded ourselves in my parents' house. I had gotten a prescription for a new drug called Subutex from one of my doctors, a little white tablet that dissolves under the tongue. Supposedly it would help with the withdrawals. I also had Xanax to help me sleep. Diane carried the heroin and cocaine, and I resigned myself to a very unpleasant seven days.By the time I reached day three, the huge flaw in my plan became apparent. WithdrawPeter, Jason is the author of 'Hero of the Underground', published 2008 under ISBN 9780312375768 and ISBN 031237576X.