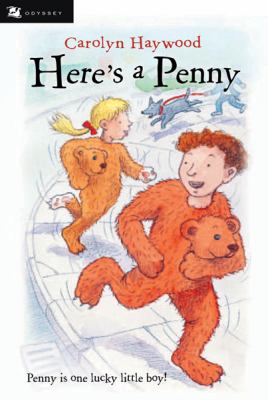 A Brand-New Penny They called him Penny. His name wasn't Penn or Penrose or Penrod or anything that would make you think of Penny. His real name was William. Before Penny came to live with his daddy and mother, his daddy had said, "When we get our little boy, let's name him William. Then we can call him Bill." "Not Billy?" asked Mother. "Not Billy, nor Willy, nor anything else that ends in ee. Just plain Bill," said Daddy. "Very well!" replied Mother. "Plain Bill it shall be." But this is how he happened to be called Penny. Long before Penny arrived, his mother and daddy decided that more than anything else in the world they wanted a little boy. "A little red-haired boy," his mother used to say. "With freckles on his nose," Daddy would add. And then Mother and Daddy would look at each other and laugh, just because they had said it so many times. One day Daddy received a telegram from the head of a big hospital. It said that they had some babies that needed fathers and mothers, so Mother and Daddy got right on the train and went to see the babies. They looked at the babies, one by one. They were all sweet and cuddly. There was one with black hair and one with hair like a fuzzy peach and there was one with no hair at all. "Maybe it will be red when he gets it," said Daddy. "No," replied Mother, "we have to be sure." And then she spied Penny. He was sound asleep in his little basket. He was the color of a ripe apricot and his head was covered with red gold ringlets. "Here he is!" whispered Mother. "Here's our little boy!" Daddy looked at him very carefully. "Is that a freckle on his nose?" he asked. Mother leaned over and looked at the tiny button of a nose. "I think it will be, by the time he is six," she replied. Mother picked him up and the sunlight fell on the baby's head. "My goodness!" said Daddy. "He looks like a brand-new copper penny." Mother cradled the baby in her arms. He opened his eyes and stretched his mouth into a funny toothless grin. "He's just a dear, precious little penny," she said. And so they named him William. But they called him Penny. Now, Penny was six years old with freckles on his nose. He was in the first grade and he loved to go to school. Patsy, the little girl next door, was in the first grade, too. Every morning Penny would stand on his toes and lift the brass knocker on Patsy's front door. Then he would hear Patsy's feet pattering, and in a moment she would pop out of the door. Then off to school they tramped. One morning Penny was full of excitement. "I'm going to get a kitten," he said, the moment Patsy appeared. "How do you know you are?" asked Patsy. "My mother said I could get one," replied Penny. "He's going to be a black kitten, with a white nose and white paws." "How do you know?" asked Patsy. "'Cause that's the kind I want," said Penny. "Well, you can't always get kittens just the way you want 'em," said Patsy. "You have to take 'em the way they come." "Who said so?" asked Penny. "My mommy said so," replied Patsy. "Well, anyway, my kitten's going to be a black kitten, with a white nose and white paws," said Penny. "I wish I could have a kitten," said Patsy. "Why don't you get one?" asked Penny. "My mommy won't let me have one," answered Patsy. "She says she doesn't like cats." "I'll let you play with mine sometimes," said Penny. "I want one of my own," said Patsy, kicking a pebble. "I think it's mean of you to get a kitten when I can't have one." Patsy pouted and there were tears in her eyes. After a while she said, "Well, anyway, I'm my mommy and daddy's real little girl." Penny didn't know what that had to do with kittens, so he didn't say anything. Patsy stood sHaywood, Carolyn is the author of 'Here's a Penny', published 2005 under ISBN 9780152052256 and ISBN 0152052259.