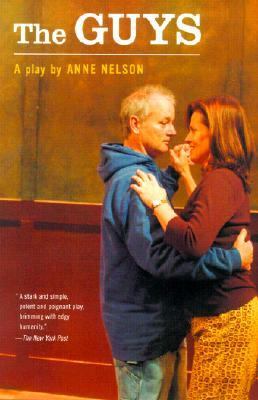 4 left in stock at this price

Preface The Guys is based on a true experience. I teach at the graduate school for journalism at Columbia University in New York, and I oversee some thirty international students. On the morning of September 11, 2001, we had sent them out, along with their American classmates, to cover the mayoral primary. It would be days before we knew that all of them had survived. I had learned about the attack on the World Trade Center in a call from my father in Oklahoma. I watched the images on television until the second tower went down. Then, numb, I turned off the television, voted, and went to my office. I remember taking out my calendar and looking at it, wondering which of the events I had planned, if any, now had any meaning. I walked over to the hospital on the next block to donate blood. The emergency personnel turned me away. They were kind, but they wanted to keep the hospital clear for the wounded. They looked over my shoulder as they talked to me, searching the traffic lanes down Amsterdam Avenue for ambulances bearing victims of the attackthose ambulances that would in fact never arrive uptown. There were far fewer wounded than anyone expected. Most of the casualties were dead. Twelve days after the attack, my husband and I took our children to visit my sister and brother-in-law in Brooklyn. Families in New York wanted to huddle, to eat together, and to talk quietly. A friend of my sister's called, looking for my brother-in-law, Burk Bilger, who is also a writer. The friend had met a fire captain and wanted to find someone who could help him. Burk was working on deadline, so I said I would help. The captain came over that afternoon. Once he got there, he told us his story: He had lost most of the men from his company who had responded to the alarm at the World Trade Center. The first service was only days away, and as the captain, he had to deliver the eulogy. But he couldn't find a way to write anything. Burk put aside his project and joined us. He and I reassured the captain and started to work. Together, the three of us spent hours producing eulogies. Burk and I worked in shifts, one of us interviewing the fire captain while the other wrote. It was clear to us that the captain, like many New Yorkers that month, was quite literally in a state of shock. Suddenly, a significant number of the people he was closest to simply weren't there. Yet in only a few days he was supposed to get up and speak before hundreds of mourners, to put something into words that would reflect their loss, as well as their esteem and affection for the fallen man. Through the strange mathematics of chance, neither my brother-in-law nor I had lost anyone close to us in the catastrophe. But like most New Yorkers, we were stunned, grieved, uncomprehending. That afternoon turned into evening, and at last we finished the final eulogy for the services that had been scheduled. The captain thanked us, several times, and then said, "You should come to the firehouse and see what I'm talking about." I did, a few days later. Like most civilians, I had never ventured beyond the firehouse doors. I saw the environment described in the playthe kitchen, the tool bench, the black boots set out on the floor ready for the firefighters to jump into at a call. I saw a long row of names written in chalk on a blackboard, which listed men as "missing" even though, since it was two weeks past 9/11, those men were surely lost. The captain and I kept in touch. More services were scheduled. He came uptown, and together we wrote more eulogies. He delivered them at the services, and I would call to find out how they went. I could tell that every step was an ordeal for him, because he, utterly unreasonably, felt responsible. Like fire captains across the city, he wanted to take care of the families of the survivors, to compenNelson, Anne is the author of 'Guys A Play', published 2002 under ISBN 9780812967296 and ISBN 0812967291.