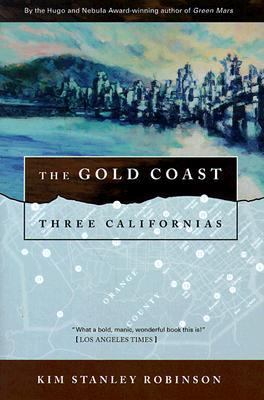 1 Beep beep! Honk honk. Jim McPherson sticks his head out the window of his car, shouts at a Minihonda whose program has just automatically slotted it onto the onramp ahead of him. "You cut me off!" The man in the Minihonda stares back at him, looking puzzled. Jim's ancient Volvo swerves sharply up the curving track and suddenly Jim's hanging halfway out the window and teetering, face inches from the concrete of the freeway. Abe Bernard grabs his belt and pulls him back in, whew! Night in Orange County, here, and the four friends are cruising in autopia. Stars of their high school state championship wrestling team, ten years past that glory, they roll over the seats of the Volvo and try to pin Tashi Nakamura, to keep him away from the eye-dropper of Sandy Chapman's latest concoction. Tash was their heavyweight and the only one still in good shape, and they can't do it; Tash surges up through their arms and seizes the eyedropper, all the while singing along with one of Jim's old CDs: "Somebody give me acheeseburger!" The onramp bends up, curves more sharply, the contacts squeak over the power-and-guidance electromagnetic track in the center of the lane, they're all thrown into a heap on the backseat. "Uh-oh, I think I dropped the dropper." "Say, we're on the freeway now, aren't we? Shouldn't someone be watching?" Instantly Abe squirms into the driver's seat. He has a look around. Everything's on track. Cars, following their programs north, hum over the eight brassy bands marking the center of each lane. River of red taillights ahead, white headlights behind, some cars rolling over the S-curved lane-change tracks, left to right, right to left, their yellow turnsignal indicators blinking the rhythm of the great plunge forward, click click click, click click click. All's well on the Newport Freeway tonight. "Find that eyedropper?" says Abe, a certain edge in his voice. "Yeah, here." The northbound lanes swoop up as they cross the great sprawl of the intersection with the San Diego, Del Mar, Costa Mesa, and San Joaquin freeways. Twenty-four monster concrete ribbons pretzel together in a Gordian knot three hundred feet high and a mile in diametera monument to autopiaand they go right through the middle of it, like bugs through the heart of a giant. Then Jim's old buzzbox hums up a grade and suddenly it's like they're in a landing pattern for John Wayne International Airport over to their right, because the northbound Newport is on the highest of the stacked freeway levels, and they are a hundred feet above mother Earth. Nighttime OC, for miles in every direction. Imagine. * * * The great gridwork of light. Tungsten, neon, sodium, mercury, halogen, xenon. At groundlevel, square grids of orange sodium streetlights. All kinds of things burn. Mercury vapor lamps: blue crystals over the freeways, the condos, the parking lots. Eyezapping xenon, glaring on the malls, the stadium, Disneyland. Great halogen lighthouse beams from the airport, snapping around the night sky. An ambulance light, pulsing red below. Ceaseless succession, redgreenyellow, redgreenyellow. Headlights and taillights, red and white blood cells, pushed through a leukemic body of light. There's a brake light in your brain. A billion lights. (Ten million people.) How many kilowatts per hour? Gird laid over grid, from the mountains to the sea. A billion lights. Ah yes: Orange County. * * * Jim blinks a big wash of Sandy's latest out of his eye, watches patterns pulse. All at once, in a satori illumination, he can see the pattern all the other patterRobinson, Kim Stanley is the author of 'Gold Coast', published 1995 under ISBN 9780312890377 and ISBN 0312890370.