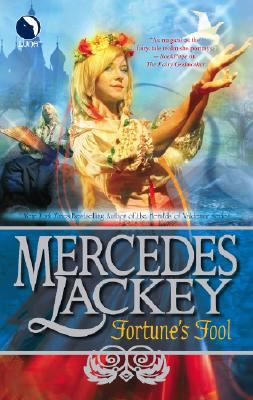 Shafts of golden light pierced the green twilight, penetrating the waving fronds of the forest to leave pools of light on the ground. The path to the Great Palace, paved with pearl shell, unraveled along the sand; a broad ribbon of iridescence, suddenly burning into a patch of blinding white when one of those shafts touched it. On either side of the path, at charmingly irregular intervals, stands of long, waving kelp, beds of colorful anemones, and coral "bushes" were being carefully tended by a small horde of tiny sea creatures.No one ever actually set foot on the path, or truly even needed to use it. This was, after all, the bottom of the sea. People swam. Even the few two-legged people, like the Sea King's children, swam.Nevertheless there was a path, winding through a "forest," though the forest was kelp, the "birds" were fish, and even the "hawks" had an analogue in the form of sharks and other predators.There were all these things because the path went to a palace. The Tradition said that all palaces should have winding paths traveling through mysterious forests filled with enchanting wildlife.So this Palace, although underwater, had such a path.In many ways, it was a good thing that no one ever actually walked on the path. Pearl shell, while pretty, had very sharp edges, and no one down here wore shoes.And that, Ekaterina, the youngest daughter of the Sea King, reflected, as she swam in a deceptively languid manner toward the palace, was a pity.Katya loved shoes. Dainty, embroidered silk slippers. Thigh-high leather boots. Strange wooden things that were like walking with tiny tables strapped to one's feet. Dancing shoes, red-heeled shoes, shoes that were hardly more than thin little straps, shoes that were substantial enough to pound a nail with. She loved them all.In fact, she loved clothing. She adored clothing. It didn't matter what the style, the fashion was, she loved clothing the way she loved shoes.Sad, really, since no one wore clothing, or at least much that was like clothing, down here.As a warrior in her father's Personal Guard, she wore her fish-scale armor of course. In fact, she was wearing it now, since she had been summoned for official business. It was as pretty as she could engineer, despite being first, and foremost, very functional. The fish scales glittered in the errant beams of sunlight filtering down through the kelp branches. It was the same pearly white as the shells beneath her, and gleamed with the same iridescence. The scales of the formfitting tunic were about the size of her thumbnail, while those on the sleeves of the tunic and the equally formfitting leggings were much, much smaller, about the size of the nail of a baby's littlest finger.Her sharkskin boots were a dead white, matching the sharkskin belt and gloves. The belt held nothing at the moment. No sword, no knives. But Ekaterina didn't need a weapon. Ekaterina was a weapon.Her hair had been bound up into a severe knot... another pity. She had lovely hair, as pearl-white as the shell also, and the fact that living under the sea allowed only two basic hairstyles--severe knot, or floating free--was another source of private regret for her.Small wonder she welcomed her father's regular summons.Hopefully this would be another trip to Dry Land! Even better if it was to a new bit of Dry Land, a place she had never been before! That would be glorious!The nearer she came to the Palace of the Sea King, the more people she encountered, though most of them were dolphins and the smaller whales, who served as her father's Palace Guard. You could always tell a Guard creature from the fluke studs denoting rank; small gold or silver rounds much like earrings, and put in the same way. She always winced at a fluke-piercing, though the cetaceans were quite proud of enduring the pain. She supposed it must be like islanders' tattoos. They, too, made a point of experiencing theLackey, Mercedes is the author of 'Fortune's Fool', published 2008 under ISBN 9780373802739 and ISBN 0373802730.

1 from $9.26
Loading marketplace prices 1 copies from $9.26 How does the rental process work?
View more