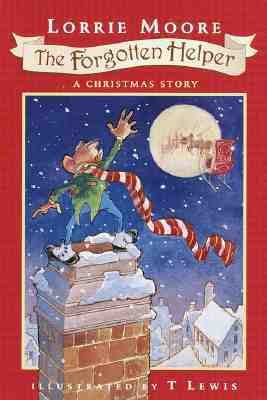 The North Pole Many, many years ago, long before now, there was an elf named Aben who was the very best toymaker at the North Pole. He'd spent twelve years in Santa's Train and Fire Truck workshop, thirteen in the Dolls and Toy Soldiers Department, fourteen in Stuffing Various Animals and Gluing On Eyes, and a year and a half in Advanced Contraptions. He knew just about everything there was to know about making toys. He was also a prankster and a crank. He was quicker and older than the other elves, and he was impatient for amusement. "I am bored!" he often shouted. Sometimes, when the other elves were having to concentrate on their work, he would tie their stocking caps together. Then he would step back and laugh and laugh. Or he would give one of them a fig bar and say it was a brownie in a tan coat--just to fool them. Or he would hide in the beams of the workshop and drop ice balls or gumdrops or sometimes an entire box of straight pins right into their projects. He would wring his hands and a puckish magic would flow out of his fingers. He caused apple pies to appear briefly on everybody's head. In short, Aben was no help at all. Lately Aben had even been putting on airs, dressing up in his Sunday best, lighting up Havana cigars as thick as thumbs. He refused to say good morning to some of the elves, whose brains he felt were slipshod and full of strawberry jam. He rarely wore the standard elf outfit of flannel coveralls, stocking cap, and jingle bells. Mostly he dressed in wool gabardines, a herringbone vest, a blouse with a silk cravat, and a swallowtail coat made of velveteen. When another elf approached him for assistance with a toy train or for advice on a particularly advanced contraption, Aben would lean back against a wall and light up a cigar. "Can't help you now, dear boy," Aben would say. "I musn't muss my sartorial splendor." It seemed to him that no one at the North Pole had cultivated a healthy appreciation of either mischief or elegance. And those were Aben's hobbies. Nonetheless, Aben's profession was toymaking. When he was younger he had won all the prizes and awards there were to be won: Best Toy Fire Engine, Best Toy Train. Now toymaking seemed dreary to him. Now certain things were expected, and it made him cross. "Aben, show us how to fix this caboose." "Aben, could you put the finishing touches on this doll?" "Aben, why aren't you helping us? It's almost Christmas Eve!" Aben mimicked the elves with a surly face. He tarnished their jingle bells with cigar smoke. In the Advanced Contraptions workroom he swung from the ceiling lights like a chimpanzee, coattails flying, and announced himself the most Advanced Contraption of all. Hee-hee! Then one day Santa Claus burst in like an inspector. He looked red-eyed and scolding and was in shirtsleeves and suspenders. His pants were unbuttoned, and he had not yet tied up his laces, which, loose as linguine, slapped the floor as he strode into the workshop. "ABEN?" bellowed Santa. He scanned the toyshop, but he could not find Aben among the other elves, who were standing frozen in their tracks. One of the littlest elves cleared his throat and pointed a discreet finger up, toward the ceiling. Aben was hanging from the lights, wearing a pink party hat and a mask over his eyes. He was puffing on a cigar and flicking the ashes onto the sewing machines below. He was drinking champagne. "Aben!" Santa yelled. "What are you doing up there?" "I am having a ball," replied Aben. "A Christmas ball." Santa was furious. He held up a toy caboose whose wheels had been nailed onto its roof every which way. "Aben, you are my best toymaker. You are my master craftsman. Why aren't you helping the other elves?" Aben tuggedMoore, Lorrie is the author of 'Forgotten Helper A Christmas Story' with ISBN 9780385327916 and ISBN 0385327919.

6 from $1.50
Loading marketplace prices 6 copies from $1.50 How does the rental process work?
View more