by McConnell, Patricia B. 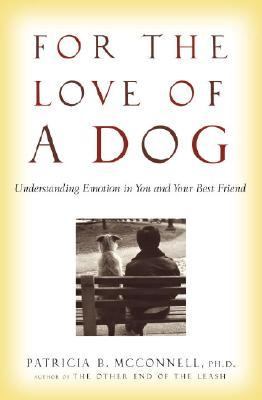 by McConnell, Patricia B.

EMOTIONS An explanation of emotions, and why they are so controversial in animals At first, all I saw was a white blur out of the corner of my eye. It was a long way away, maybe five hundred yards, and initially I wasn't sure what it was. Most of my focus was on my Border Collie Luke, who was running his fastest about two hundred yards away. I'd sent him on a long out- run toward a flock of sheep during a "fun day," when herding enthusiasts get together and revel in dogs and sheep and the sloppy kisses of young puppies. Many people there that day were serious competitors in herding dog trials, and were grateful for the opportunity to hone their skills away from home. Luke and I, however, were there just for the pure joy of it. We loved working together, Luke and I, finessing sheep gently and quietly across the countryside. A classic workaholic, Luke loved working sheep so much he had no interest in food, tennis balls, or even bitches in heat when there was a job to do. For me, watching my trustworthy black-and-white dog doing a perfect outrun on an emerald-green hill made my heart get bigger and my soul feel full. That's how I was feeling that morning as I watched my good old dog run perfectly and reliably toward the woolies on the far hill. But all my feelings changed as I realized that the white blur running toward Luke was a hundred-and-twenty-pound working Great Pyrenees who had escaped temporary confinement and was barreling down on Luke to protect his flock. We were on a large, isolated farm with several dispersed flocks of sheepa smorgasbord to the coyotes and stray dogs that commonly roam the countryside. Many of us in southern Wisconsin need working guard dogs to keep our flocks safe, and this farm had two of them. Unlike my guard dog, Tulip, who now protects the farm from the living room couch, these dogs lived exclusively with the flock, and were serious to the bone about killing anything that threatened their sheep. As I watched the guard dog run toward Luke, my feelings of joyful fulfillment were transformed into abject terror. The thought that I was about to watch my dog being attacked and possibly killed overwhelmed me. I love Luke so much it almost hurts.In Dog Is My Co-pilot, in an essay about why we love dogs so much, I said about Luke: "And I still love him so deeply and completely that I imagine his death to be as if all the oxygen in the air disappeared, and I was left to try to survive without it." Horrified at what I thought was about to happen, I screamed, "The guard dog is out, the guard dog is out!" Stating the obvious wasn't going to solve the problem, but it seemed to be all I could do. For the longest second imaginable, my mind was a black hole, as if my emotions had sucked away the rational part of my brain and left a cavernous skull full of nothing but fear. I can remember that terror now, and can visualize the scene as if in a photograph: emerald-green pasture, black-and-white Luke in full stride just where he ought to be, and a white bullet of doom streaking across the grass toward him. But what of Luke? What went through his mind as he dashed through in the grass with a canine hitman running toward him? Was he as scared as I was? And if he was, how much did his version of being scared resemble mine? Luke and I were best friends, just as many dogs and humans are best friends all over the world. As friends do, we shared long cool walks in shady forests, tasty dinners of roast chicken or lamb, and long sleepy cuddles on the couch in the depth of winter. We shared hard times loading wild-eyed market lambs on to the truck, getting lost on back highways late at night while traveling, and making mistakes while working sheep that cost us valuable time, energy, and on occasioMcConnell, Patricia B. is the author of 'For the Love of a Dog Understanding Emotion in You and Your Best Friend', published 2006 under ISBN 9780345477149 and ISBN 0345477146.