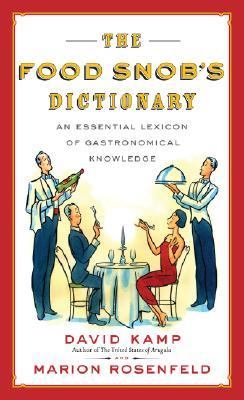 Acme Bread Company. Gold standard of ARTISANAL bread baking in the United States, based in Berkeley, California, and founded in 1983 by former CHEZ PANISSE busboy and house hunk Steve Sullivan, who was inspired to try his hand at baking while reading ELIZABETH DAVID'sEnglish Bread and Yeast Cookeryduring an overseas bike trip in his college years. Ferociously devoted to handformed loaves and organic ingredients, Acme has a lower profile than the corporateartisanal brands it inspired, New York's Tom Cat Bakery and Los Angeles's La Brea Bakery, but it enjoys a greater mystique, largely due to Sullivan's ponytailed, shamanistic presence and refusal to sell his wares much beyond the Bay Area.Picked up anAcmeherb slab at Monterey Market en route to the Orville Schell lecture. Adria, Ferran. Spanish chef of appropriately surrealist, Daliesque mien who functions as a lightning rod in the Food Snob debate over whether MOLECULAR GASTRONOMY is bracingly innovative or overwhelmed by gimmickry. The popularizer of the vegetable FOAMS that reviewers loved in Spain in 1998 but jadedly condemn in America now, Adria, who operates out of a coastal Catalan resort called El Bulli (The Bulldog), combines a DayGlo aesthetic with a FERNAND POINT fealty to getting the most flavor out of his ingredients, resulting in such weirdass but surprisingly edible creations as a sardine skeleton enshrouded in cotton candy and skinless greenpea raviolis that look like Dr. Seuss egg yolks.I clocked someFerran Adriainfluence in those fruit soups that we sucked down from medical syringes. Affinage. The process whereby young cheese is refined and matured, usually in a cave or climatecontrolled chamber. The anointed cheese-coddler, known as an affineur, rotates the cheese and beats, brushes, and/or washes it until it is a point and ready to be savored. In the latest manifestation of cheesecourse mania, some American restaurateurs now employ their own affineurs, though no one has yet made the logical, inevitable step of marketing home affinage units in the vein of SUBZERO winestorage units. Asian street food. Increasingly chic trope-inspiration among chefs and restaurateurs (e.g., JeanGeorges Vongerichten and Anthony Bourdain) who have eaten their way through Saigon, Rangoon, Singapore, Bangkok, and Jakarta, and have somehow decided that they have seen the future of all cuisine.My new place will combine Viennese-bordello decor with a menu inspired byAsian street foodpho, satays, potstickers, all that shit. Bain-marie. Overwrought term for "double boiler," deployed especially by retailers trying to sell expensive, purposebuilt doublepot sets to statushungry home cooks, even though it's easy to improvise a bainmarie with gardenvariety roasting and sauce pans. Oddly, themariepart of the term (bainis simply French for "bath") comes from an ancient alchemist known as Mary the Jewess, who believed that using a double boiler's indirect heat simulated the natural processes by which precious metals formed. Baum, Joe. Brash, cigarchomping aphoristrestaurateur (1920-1998), beloved by restaurant professionals, unknown to laypeople, and therefore a god to Snobs. Working first for the New York hospitality company Restaurant Associates and later on his own, Baum was adamant that fine dining in America didn't have to be toetheline French, a vision that he sometimes executed successfully (the Four Seasons, Windows on the World) and sometimes not (the Romanthemed Forum of the Twelve Caesars,Kamp, David is the author of 'Food Snob's Dictionary An Essential Lexicon of Gastronomical Knowledge', published 2007 under ISBN 9780767926911 and ISBN 0767926919.