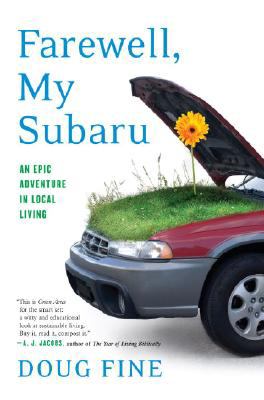 One THE PARKING BRAKE WAKE-UP CALL As I watched my Subaru Legacy slide backward toward my new ranch's studio outbuilding, the thought crossed my mind that if it kept going and I didn't see why it wouldn'tat least I would be using less gasoline. A few days after I moved into the sprawling, crumbling, forty-one acre New Mexico spread that I had named the Funky Butte Ranch (it had a funky limestone butte on its east side where two great horned owls with an active love life nested), I neglected to firmly apply that last click to the parking brake on my aged fossil fuelpowered hatchback, the LOVEsubee. This was a good thing. Really. The imminent demise of my ride, I rationalized, would help me with one of my four big goals for the next year, which were: 1. Use a lot less oil 2. Power my life by renewable energy 3. Eat as locally as possible 4. Don't starve, electrocute myself, get eaten by the local mountain lions, get shot by my UN-fearing neighbors, or otherwise die in a way that would cause embarrassment if the obituary writer did his or her research Epiphany in the desert Southwest is not subtle. Almost nothing in this stark, gorgeous ecosystem is. I moved several thousand miles from my place of birth in order to kick fossil fuels and live locally. Three days later, MY CAR WAS LITERALLY RUNNING AWAY FROM ME. This is how lessons are taught in a place where even sitting down means a possible impaling. I figured I would forge success from astonishing, seemingly irrevocable defeat, you know, like Al Gore. I didn't need the message hammered home so literally. The time was absolutely right for me personally to embark on this adventure in living greenother than having no electrical, plumbing, building, engine mechanical, horticultural, or animal husbandry skills at all, that is. After growing up on Dominoes Pizza in the New York suburbs, at age thirty-six I wanted to see if a regular guy who enjoyed his comforts could maintain them with a reduced-oil footprint. In concrete terms, this meant raising animals and crops for my food, figuring out some way besides unleaded to get anywhere, and making bank accountdraining investments in solar power. I'd lived and worked in extreme conditions on five continents since the beginning of my career as a journalist fifteen years ago, but time and again, after shivering in Alaska and dodging bullets in Tajikistan, I reaffirmed what I already knew: I like my Netflix, wireless e-mail, and booming subwoofers. In fact, I didn't want to live without them. I just wanted to power them by the sun. If my ear- melting music could go solar, and still make my UN-fearing neighbors complain about bass lines interrupting their nightmares of Hillary Clinton, I'd consider this experiment a success. If I had reliable Internet and could download movies into my green world to boot, the feeling would be closer to "Eureka!" Especially if I was eating munchies I'd grown, raised, or at least bought locally. Because as I saw things, global climate change, pollution, world wars, and human rights aside, the Oil Age has had a great run: fossil fuels turned the United States, for example, from a nation of farmers into the Jetsons. I largely welcome this. I know I sure dig my laptop. When else in history could I have listened to Malian drumming or Beatles outtakes (or some DJ mixing the two) all within three clicks? When else could I be that DJ? This really is the best time ever to be alive, if you're fortunate enough to live in the West and not be in the armed forces. In short, I wanted to prove that green Digital Age living was possible, and I was psyched to get cracking. Coincidentally, society seemed to be ready, too, or at least to have transformed from considering such anFine, Doug is the author of 'Farewell, My Subaru', published 2008 under ISBN 9781400066445 and ISBN 1400066441.