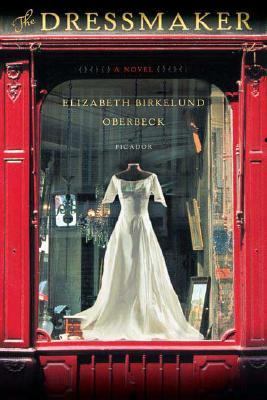 Chapter One Blossoms fluttered everywhere that morning outside the dressmaker's studio. They cascaded from above, settling at the base of the century-old apple tree like a pool of white satin at the hem of a wedding gown. Wedding gowns. Claude Reynaud had designed and sewn hundreds of them, but still, he thought, as he stitched on a lacy trim, they made him uneasy: the symbolism of the white dress, the secrecy of the veil, the surprise of the bride's sudden appearance before the slow, irrevocable procession down the aisle. . . . A fresh breeze from the wide-open window interrupted his thoughts. Drawing in the scent of apple blossoms, Claude studied the gnarly trunked tree that his great-grandfather had planted a century ago. The sap ran through this tree's branches as surely as blood pulsed through his own body and those of the generations of gentle Reynauds before him, traditional dressmakers all. But times were changing, as was Claude's clientele. Thanks to a favorable article in a widely read French national newspaper and several devoted clients, Monsieur Reynaud's talent had begun to attract sophisticated Parisiennes willing to drive forty minutes out of Paris to be "fitted." They broke the speed limit as they entered the humble town of Senlis, situated twenty-nine miles north of Paris as the crow flies, on the rue Vieille de Paris, an ancient thoroughfare for textile merchants traveling from Paris to Flanders. Claude Reynaud and his assistant, Antoine Boudin, often called Vite Boudinfast Boudinby Parisians who preferred speed over all else, produced a dress, suit, or gown every three to four days. Now that it was early spring, wedding-dress season was in full swing. As he sipped his cafe creme and broke the brioche that his sister had dropped off that morning on her way to work, Claude reviewed his appointments for the day. "Pedant," he said, peering into the blinking green eyes of his tall, full-feathered blue-and-golden-fronted parrot, "we have a new client today. A Mademoiselle de Verlay. Referred by Madame de Champy. A July wedding." He reread the note scrawled next to Mademoiselle de Verlay's name. The bride-to-be had given her dressmaker total freedom over the gown's design. Claude had never been awarded such trust for a bridal dress. Most affianced young women arrived at his studio clutching wrinkled magazine photographs of brides, convinced their childhood dreams of a fairy-tale wedding would be fulfilled to the last detail. A bird, he could not tell what kind, suddenly crashed into the closed upper portion of the window. When Claude looked up, he noticed that the wind had died down momentarily and the apple tree's white gown of blossoms was complete. Eleven a.m: a barely audible knock at the door. Despite the gentleness of the intrusion, Claude jumped. A woman entered, the wind urging her in from behind. "Bonjour?" the voice called, out of the dark vestibule into the sunlit room. Claude extended his hand. Long tapered fingers outstretched, a small face emerging out of a dark scarf, large smiling eyes, a pointed chinthese were Claude's first impressions of his new client. "Bonjour. I'm Valentine de Verlay. Pleased to meet you." The words caught her breath in them; hers was a lovely, rich, windy voice. Claude took her lightweight camel coat to the closet, noting as he did the dark brown sheath of hair resting just below her shoulders, the almond-shaped eyes, the smile on the corners of her lips. She strode into his studio with composed confidence, her head high.Oberbeck, Elizabeth Birkelund is the author of 'Dressmaker ', published 2007 under ISBN 9780312426927 and ISBN 0312426925.