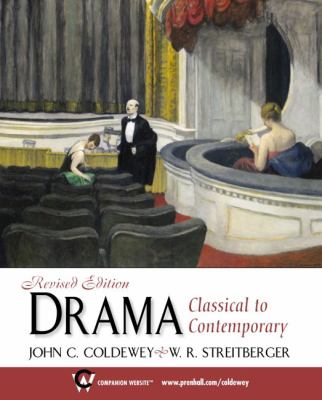 Preface The revised edition ofDrama: Classical to Contemporarybrings together a collection of thirty-nine important plays and one trope from the classical period to the present day, making it one of the most comprehensive anthologies of drama available. It includes generous selections of Greek drama (four plays), medieval drama (two plays and one trope), Renaissance drama (four plays), neoclassical drama (three plays), early modern European drama (six plays), later modern American and European drama (eight plays), and a rich and varied selection of contemporary drama (twelve plays). The earliest play included was written in the 5th century B.C., the latest in the 1990s. Drama: Classical to Contemporaryis divided into seven parts, representing key periods in the history of Western drama and theater: the classical drama of ancient Greece, the medieval, Renaissance, and neoclassical drama of Europe, and modern and contemporary drama from Europe, Africa, and North and South America. The plays have been selected to support a wide variety of approaches in teaching drama and theater, and the anthology is designed to be used at beginning and intermediate levels in literature, drama, and humanities departments, in courses such as introductions to drama, general surveys of drama and theater, studies of tragedy or of comedy, and studies of tradition or of innovation in drama. Although the anthology contains a sound selection of historically significant plays, proportionately the emphasis is on modern and contemporary drama. The revised and corrected edition ofDrama: Classical to Contemporarypresents a more comprehensive anthology for students of drama and theater than the original version. It retains the solid and varied selection of plays with one change: Eugene O'Neill'sDesire Under the Elmshas been added in place of his The Emperor Jones. A useful addition in this revised and corrected edition are theater critics' reviews of performances of every play. During the late twentieth century the study of drama has undergone tremendous change.Drama: Classical to Contemporaryreflects that change by emphasizing the importance of the theaters where plays were originally produced and of the societies that built those theaters, by emphasizing the critical and interpretive histories of these plays over time, and by emphasizing the performances of those plays in their own times and in ours.Drama: Classical to Contemporarythus aims to present drama in several important contexts: within these plays' original theaters and societies; within our own time, where plays still serve important cultural functions as literature; and in records of their performance, where the plays continue to live in theaters as part of a larger social discourse. Each of the seven parts ofDrama: Classical to Contemporarybegins with an introduction that situates drama in the cultural and theatrical contexts of the period. Here contemporary production practices, audience expectations, and theatrical performances are described. Illustrations of theater architecture, included in each part, help the reader develop an understanding of staging possibilities. Every play is prefaced with a brief biography of the playwright and a short introduction that reviews the critical reception of the play and discusses interpretive possibilities. Finally, each part concludes with two further sections:Contexts and Commentaries,which offers readings from criticism, documents, and essays that reflects historical and contemporary, aesthetic and cultural concerns; andPerformance Reviews,which offers professional drama critics' commentaries on actual productions of the plays. All of this material has been selected to situate drama and theater within the contexts of literary history, theater history, and social history, and to provide the material for in-depth discussions of how plays continue to infoColdewey, John C. is the author of 'Drama Classical to Contemporary', published 2000 under ISBN 9780130884411 and ISBN 0130884413.