Draft A Year Inside the Nfl's Search for Talent 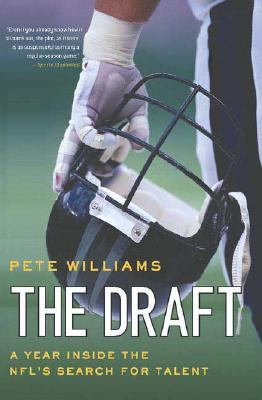 Chapter One First Contacts Ed Hawthorne and Ed Walsh looked at the young football agent sitting across the table from them and chuckled. Jack Scharf seemed right out of central casting. With a lantern jaw, bleached-white teeth, and jelled dark hair, he looked like a taller Tom Cruise. The forty-five-hundred-dollar, custom-tailored Armani suit, cuff links and white monogrammed shirt he wore covered a lean physique, shaved to accentuate the muscles. Scharf's rented Jaguar XJ8 sat outside Walsh's law office in New Haven, Connecticut. "Say it, Jack," Hawthorne said. Scharf shook his head. "C'mon guys." Hawthorne raised an eyebrow. "Jack?" "All right," Scharf said, taking a deep breath. "Show me the money." Walsh and Hawthorne laughed. "Not bad," Hawthorne said. "Louder." "Show Me the Money!" Scharf yelled, channeling Cruise. "Show . . . Me . . . the . . . Mon-ey!" The Eds cackled. It was early September 2004, and Scharf was among the first agents to make a presentation in the hopes of representing Hawthorne's nephew, Anttaj, a 312-pound defensive tackle at the University of Wisconsin, for the 2005 NFL Draft. There was little resemblance between Ed and Anttaj. Walsh, the family attorney, liked to greet agents in a conference room first and then introduce Ed Hawthorne to gauge the response. Most agents showed little reaction, though the recruiting process did have its amusing moments. Whenever agents reached Anttaj on his cell phone in Wisconsin, he directed them to Uncle Ed. One agent called Uncle Ed and immediately dealt the race card. "You know, Ed," the agent said. "All of our brothers are coming out of the NFL today and they're broke. Why? Because of the white agents, that's why; and I'm here to make sure that doesn't happen to 'Taj." Hawthorne paused. "Do you realize I'm white?" Ed's sister, Eileen, had raised her biracial son alone. "Well, you know," the agent said after an awkward pause, "I've got white family, too." That agent never got a meeting with the Eds, who vetted potential representatives for Anttaj, allowing him to spend his senior season focused on football and not on who might guide him through the NFL Draft in April. The Eds liked what they saw of Jack Scharf, who beneath the slick, Jerry Maguire veneer had, at thirty-five, established himself as a legitimate player in the brutal world of football agents. He had flown from his office in San Antonio to New Haven armed with binders full of spreadsheets and contract information, showing how his companyMomentum Sportshad skillfully landed contracts for its clients at better than the market rate. Scharf's presentation included testimonials from clients such as Nick Barnett, a linebacker drafted in the first round out of Oregon State by the Green Bay Packers in 2003. There were DVDs outlining the marketing efforts Momentum would undertake on behalf of Anttaj, and the trainers the company would employ to get Anttaj ready for the February NFL scouting combine in Indianapolis, where draft hopefuls are tested physically and psychologically by NFL teams.[read more]