Demon in My View 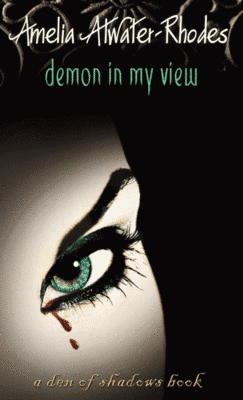 CHAPTER 1 The black oblivion of sleep was shattered by the caterwauling of some singer on Jessica's clock radio. She groaned and viciously beat the alarm clock into silence, then groped blindly for the light switch. The somber red glow of her Lava lamp provided just enough light to read the time. Seven o'clock. The red numbers glowed sadistically, and Jessica swore. Only two hours of sleep again. How she managed to remain in the conscious world at all was a mystery, but she dragged herself into the shower, where the cold water finished what the alarm clock had started. Only one hundred and eighty days of school left, Jessica thought as she prepared for the first day of her senior year of high school. There was barely enough time to get dressed before she had to pull her backpack onto her shoulders and dart down the street to catch the bus. Breakfast? A fleeting dream. Ah, Ramsa High School. What a perfect little niche of Hell, she thought as the bus pulled up to the school. In one year, you will be out of here forever. That fact was the only thing that had convinced Jessica to get out of bed that morning: if she passed senior year, she would never need to succumb to the grasp of Ramsa High again. She had lived in the town of Ramsa since she was twelve, and had long before realized that the other students would never accept her. Few were openly hostile, but no one could be described as warm and fuzzy, either. As she neared the building, Jessica was acutely aware of how many students walked in groups of friends. She had known these people for five years, but that didn't seem to matter as they moved past her without a word. She even saw two girls notice her, whisper to each other, then quickly retreat as if Jessica was somehow dangerous. One senior, a boy Jessica had known since her very first day at Ramsa Junior High, crossed himself when he saw her. She was tempted to start chanting satanically in the hopes of scaring him. He had long before decided that she must be a witch, and she had no idea why. Occasionally, out of spite or simply boredom, she encouraged his belief. The thought was amusing in a way. The only witches she knew lived solely in the confines of the novels she'd been writing for the past few years. One of her witches could walk right in front of this idiot and he would never recognize her as what she was; Jessica's witches tended to be rather human in their manner and appearance. More humorous, though, was the fact that her old enemy was holding the book Tiger, Tiger by Ash Night. Jessica wondered how he would react if he knew that she would soon be receiving royalties from his purchase. Jessica had been struck by the idea for Tiger, Tiger several years before, when she and Anne had been visiting one of Anne's old college friends in Concord, Massachusetts. She had spent nearly the entire week- end vacation locked in her room, and those hours of work had finally paid off. In homeroom, Jessica sat in the back, alone as always. She waited in silent contemplation for attendance to be taken. The teacher was a young woman whom Jessica had not seen before; her name was written on the board and had received a few snickers from the students. Kate Katherine, high-school teacher, must have had sick parents. On the other hand, her name was probably easier for people to remember than Jessica Ashley Allodola. "Jessica Allodola?" Mrs. Katherine said as if cued by Jessica's thoughts. "Here," Jessica answered absently. The teacher checked off the name in her book and went on to the next person on the list. The words of Jessica's adoptive mother, Anne, echoed through her mind. "Tomorrow is the first day of a new year, Jessie. Could you at least try not to get sent to the office? Just this once?&Atwater-Rhodes, Amelia is the author of 'Demon in My View' with ISBN 9780440228844 and ISBN 0440228840.