Deke! U.S. Manned Space From Mercury to the Shuttle 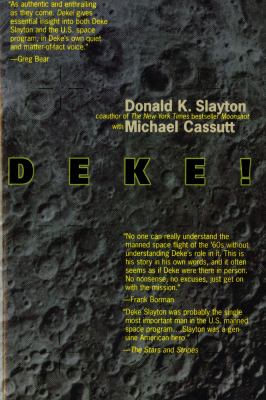 1 Beginnings I guess when it comes to space and aviation, I've seen and done a lot in fifty years. My name isn't the first one to come to mind when somebody says the wordastronaut, but I was one of the original Mercury guysthe one who got screwed out of a mission for medical reasons. I hung in there and wound up running the Astronaut Office. Neil Armstrong became the first person to walk on the moon because I selected him. I eventually got into space, however, on Apollo-Soyuzthirteen years after I should have. When I was four years old, growing up on a dairy farm in Wisconsin, I was fond of running across the country road to the neighbor's place. There wasn't much traffic on that road, but my mother was terrified that I'd get hit by a truck. With three other children younger than me, she had her hands full and her eyes elsewhere. So whenever she let me out into the front yard, she tied me to a tree with a rope. I was tethered like a puppy. I could run around, but only so far. I certainly couldn't reach the road. Eventually I convinced my mother that I wasn't going to go running into the road, and I was set free. But I can make the case that ever since I was young I have wanted to explore...and people have tried to stop me. * * * It's not as though there was anywhere to run to. The Slayton farm was a mile north of Leon, Wisconsin, which itself wasn't much more than a wide spot in Highway 27, which runs south of the city of Sparta. Sparta was a small town in those daysI remember the population well, because it was the same as the number of feet in a mile5,280. I think it's now grown almost to a nautical mile, 6,010 or something. In 1959, the year I was selected as a Mercury astronaut, Leon's population was 150. It probably still is, for all I know. It had a general store named the Farmer's Store, a feed mill, a couple of filling stations, a garage, and two farm implement dealers. I had an older half sister, Verna, and an older half brother, Elwood. My dad, Charles Sherman Slayton, was married once before, but his first wife died when Elwood was born. Elwood was farmed out to an aunt to raise, so he was more like a cousin than a brother...he didn't live with us. Verna, who was four years older than Elwood, did live with us. She eventually died of multiple sclerosis. Elwood is still up in Wisconsin. My dad remarried to Victoria Larson, and I'm the oldest from the second marriage. I've got a brother, Howard, one year younger. A sister, Bev, a year younger than he is. A sister, Marieshe's two years younger than Bev. My youngest brother, Dick, is nine years younger than I am. So that's the family. I should point out that to my family, and to the rest of the world until I was in my thirties, I was always Don Slayton. Nobody called me Deke until I became a test pilot at Edwards in the 1950s. Slayton is supposed to be English, but three of my grandparents came from Norway. The English one we've traced back to New England somewhere. My dad used to say he was probably a cabin boy or horse thief. There are a lot of Slaytons around the country, I've discovered. I go someplace and somebody pops up to say he's my relative via this channel, forty times removed. My dad was an avid reader, even though all he had was an eighth grade education. He took theSaturday Evening Postand theFarm Journal. When I was a little older he even became the township tax collector, but managed to stay liked by everyone. He took jobs because farming was a tough way to make a living, especially in the thirties. Nobody had money in those days and by most standards we were poor.Slayton, Deke is the author of 'Deke! U.S. Manned Space From Mercury to the Shuttle' with ISBN 9780312859183 and ISBN 031285918X.