Death by Pad Thai And Other Unforgettable Meals 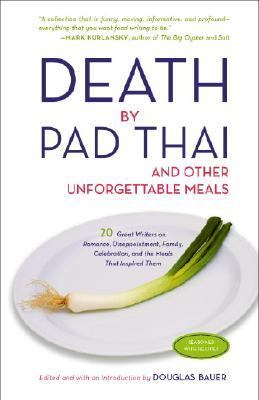 Chapter 1 Foodums Sue Miller When my son was in high school, around fourteen or fifteen years old, he wouldn't arrive home from school until early in the eveningafter sports practice, after showering and catching the commuter train from Concord to Cambridge, after walking the ten or so blocks from the train station to our house. His last full meal would have been lunch, a meal he probably would have expended, calorically speaking, by mid-afternoon. He'd step in the front door, drop his backpack on the floor, and half-moan, half-yell, "Foodums!" Sometimes, if the wait for supper was going to be more than ten minutes or so, tears would actually rise in his eyes, tears of pain, of sheer ravenous hunger. In those days I thought of myself not so much as a person who cooked, but as a person who presented edible fuel, so many calories thousands at each meal to a raging fire. In fact, watching the fork or spoon lift to my son's mouth over and over, occasionally I would remember the repetitive motion of my father, shoveling coal into the furnace in the basement of the house I grew up in: the door swung open, the heat pulsing out, the fire yellow-white and alive inside. My sonBen is his namehad always been this way around food: in need. In earlier years, the younger children on our child-friendly block would sometimes gather in our kitchen on Saturday mornings when I made pancakes for Ben's breakfast, to watch him eat them, to see if he could top his record this time. Ben, I should add, was never fat. He burned. He never stopped burning, never stopped moving, until he collapsed at the end of the day. What did I cook? Carbs. Carbs were the dish du jour, every day. The specialite de la maison. Who could afford enough meat, even enough vegetables, to satisfy such an appetite, such need? Not me in those days, a single parent working in day care. And if, on some special occasion, we were having meat, I'd have to give Ben bread first, lots of bread while he waited for dinner to be cooked. Bread to dull the sharp edge of his hunger, so that he wouldn't consume the whole roast, the whole chicken, all of the stew. Mostly, though, I served carbs in one form or another. Macaroni and cheese, spaghetti, stir-fried rice with vegetables, grilled cheese sandwiches. I wasn't into culinary subtlety. It was all gone in about ten minutes anyway. It wasn't that I couldn't cook in an interesting way. I entertained often, and on those occasions I enjoyed setting out an elegant meal. Sometimes I made an elegant meal for Ben, too, and he liked that. Chinese dishes, French dishes, Italian dishes, he liked them all just fine. But what he needed was foodums. Fast, high-carb, in bulk. Foodums. It's what, when you're the cook and it's demanded, you have to supply. And boring as such food can be to prepare, especially when you've prepared it over and over and over again, it is what most children like to eat. I wish I'd been fed that way as a child. Instead I remember, for example, the dreaded kidney stew, so overcooked that the vegetables were mushall vegetables were mush until about 1975, I thinkand the kidneys had turned gray and hard as rubber. If you'd thrown them across the room, and how I yearned to! they'd have bounced back. It's not called offal for nothing. Or tongue. Boiled beef tongue. A very large tongue, also overcooked, sitting like an embodied obscenity on a very large platter. Tongue, intricately curled, particularly at what would have been the back of the throat, and thrust out at you aggressively. Like the meanest kid in third grade: "Nyah! Nyah!" Like the Rolling Stones logo, withoutBauer, Douglas is the author of 'Death by Pad Thai And Other Unforgettable Meals', published 2006 under ISBN 9780307337849 and ISBN 0307337847.