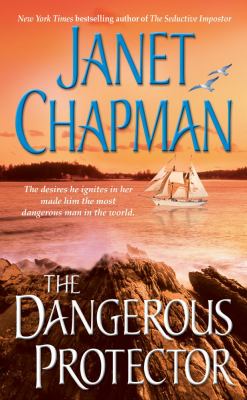 Chapter Two With the patience ofa predator waiting for supper, Duncan leaned against the candy red SUV in the dimly lit parking lot, his arms folded over his chest and his feet crossed at the ankles in a pose that might appear almost languid to anyone who didn't know him.He was soon rewarded by the sight of Willow climbing out the restroom window of his pub; one shapely jeans-clad leg appearing first, followed by a deliciously firm little butt, followed by another leg, until she was hanging suspended over the sill. Her sweater caught on a protruding nail as her waving feet searched for a toehold, and she suddenly tumbled down over the stack of firewood with a curse loud enough to be heard all the way across the parking lot.Despite his dark mood, Duncan couldn't stifle a smile. It was a wonder she could even walk after putting first one foot in her mouth by spilling Rachel's secret, then cramming in her other foot when she'd blurted out that she wouldn't be home until late tomorrow morning.That Rachel had told Duncan she'd heard Willow on the phone with an old high-school boyfriend earlier also didn't bode well for the sassy-mouthed little brat.He was one second away from dragging Willow home -- kicking and screaming, if that's what it took -- and tying her to his bed and not letting her go until she agreed to marry him.Duncan's smile widened at the image of her tied to his bed. He watched Willow creep toward freedom while looking over her shoulder at the front corner of the building. A cool ocean breeze was blowing her long, blunt-cut brown hair across her face, the hem of her heavy wool sweater was hiked up over one shapely breast, and there was a smudge of white paint on her left knee. She was also fishing in her pocket for her keys, obviously forgetting that she had the same bad habit as most of the citizens of Puffin Harbor and had left them on the floor of her truck.Those keys were now tucked safely in Duncan's pocket.Apparently satisfied that she had made her escape relatively unscathed, Willow started sprinting toward her truck only to finally spot him, swallow a gasp, and skid to a halt just four paces away.Duncan continued to watch in fascination as her chin came up, her shoulders squared, and her large hazel eyes glittered with challenge. Still he didn't move from his insouciant pose, but simply stared back, not saying a word, and waited to see how inventive her lie would be.Lord, he enjoyed her games.She suddenly made a production of looking at her watch, holding her wrist toward the dim light of the streetlamp. "I'm going to be late, Dunky," she said with a hint of impatience, lifting one brow as her shimmering gaze returned to his. "Was there something you wanted?""Aye. You."She smoothed her sweater back down into place, settled her hands on her hips, and shook her head. "We both know that's never going to happen.""Never say never, counselor. It's a word that always comes back to haunt ya. Where are ya going tonight, Willow?""If it's any of your business, I'm going to visit an old friend I haven't seen since high school.""All night?"Her chin rose the slightest bit higher, and her hands on her hips balled into fists. "We'll probably have a few drinks, so I won't be able to drive home. And if I know his wife, she'll cook a breakfast so big I won't be able to walk away from the table, either.""Ray and Patty Cobb separated three months ago."Willow's hands fell from her hips. "They're separated?"Her surprise wasn't fake, Duncan realized. She truly hadn't known. "Aye," he said quietly. "So tell me, did you call Cobb or did he call you?"She took a cautious step back, though he hadn't moved so much as an inch, but then she stiffened. "How do you know I'm going to see Ray?" Her eyes narrowed. "And who told you he and Patty are separated?""Your sister just told me, while you were hiding in the restroom," heChapman, Janet is the author of 'Dangerous Protector', published 2005 under ISBN 9780743486316 and ISBN 0743486315.