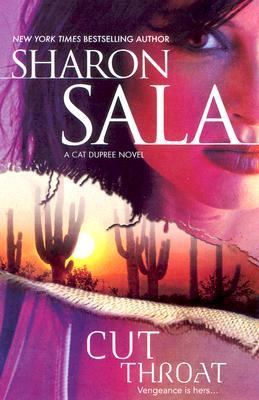 The faint cry of her neighbor's new baby was barely audible from where bounty hunter Cat Dupree was sitting in her apartment, and yet, for some reason, it was all she could hear. She'd blocked out the thunder of her own heartbeat and was ignoring the sick, helpless feeling that had taken root in the pit of her stomach. Her entire focus was on the wanted posters plastered over the walls of her office; that and the baby's continuous wail. Her laptop was sitting on top of a file cabinet by the door. The GPS program that was running showed a map of Mexico and a blip that, for the past thirty-six hours, had continued to move steadily westward. It was her worst nightmare come to life, yet she chose to ignore it for the faces on the wanted posters. After all these years, the faces were as familiar to her as her own, and yet none of them matched the face of the man who, since childhood, had haunted her dreams. The man who had killed her father and left a six-inch scar along the base of her throat. The same man she'd seen only a few weeks ago and had been certain, so certain, was finally dead. She glanced back at the laptop and winced. Now she wasn't so sure. Wind rattled the windowpanes behind her, signaling the oncoming storm heading for Dallas. Rain was imminent, but the temperature was in the high thirties, which meant no accompanying ice or snow. After the ice storm they'd endured during Christmas, a simple rainstorm was welcome news. As the wind gusted again, she shivered, then folded her arms across her chest and hunched her shoulders, thankful for the central heating in her apartment. As she did, her focus shifted to the wanted poster tacked above the doorway.The poster of Justin "Mad Dog" Bailey was the first she'd hung more than fifteen years ago. He'd been singled out as worthy of posting for the simple fact that he had tattoos all over his face and body, one of the identifying features of her father's killer. She'd known immediately that he wasn't the man she was looking for, but she'd had to start somewhere, so she'd tacked him up. She tunneled her fingers through her hair. Her head ached, and the muscles in her neck and back were miserably tight, but that was of no importance to her. It was revenge that had driven her to where she was in life, and it was revenge she needed. Her gaze slid to the next poster. Edward John Forrest. Edward was too young to have committed the attack on her family, but she'd felt compelled to hang his booking photos anyway, and so it had begun. Over the years, she'd acquired an impressive collection. As she stood, she realized the neighbor's baby had quit crying. Either someone had poked a bottle in its mouth, or it had finally given up and fallen asleep. The silence was oddly uncomfortable. Now there was nothing to sidetrack her awareness of that damned laptop and the map on its screen. Frustrated by her lack of willpower, Cat glanced up again, squinting slightly as the light glared on the monitor, blurring the geography through which the blip continued to move. Even though she couldn't see it clearly, she knew it well.It was Mexico, the place where she'd run her best friend's killer to ground. She glanced back at the wanted posters all over her office walls. After Mexico, they were redundant, because there she'd come face-to-face with not only the man who'd killed her friend Marsha, but the tattooed man she'd spent half her life looking for. His name was Solomon Tutuola, and while, for the third time in her life, she had unexpectedly lived to see another day, she had been under the assumption that Tutuola had not. Then this damned blip had resurfaced, taunting her with the possibility that her assumption had been wrong. Feeling defeated, she moved slowly toward the doorway, then paused under Mad Dog's poster and reached up. The paper crackled as she slipped a fingernail beneath the edge. For some reason she hesitated, discovering it wSala, Sharon is the author of 'Cut Throat', published 2007 under ISBN 9780778325079 and ISBN 0778325075.