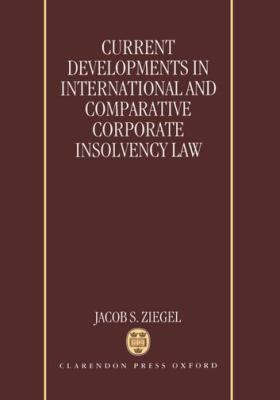 The last decade has witnessed an unprecedented growth in insolvency law in many parts of the world. A deep and prolonged recession in Europe, the US, Japan, and beyond has fuelled the development of sophisticated and conceptually complex sets of laws aimed at coping with the consequences of business failure. The existence of an almost simultaneous programme of reform proposals and pressure for further changes in a number of jurisdictions is therefore not mere coincidence, but reflects the global character of the problems caused by corprorate collapse. It is of immense importance to lawyers and insolvency practitioners that they are able to understand recent developments in insolvency law in a number of jurisdictions, and that they are aware of what is happening internationally to improve procedures and methods to deal with new problems. This collection of essays covers recent developments in a number of jurisdictions and looks, also, at developments of the leading corporate insolvency specialists in the US, UK, Australia, Japan, and Canada. This volume will be a vital source of reference on up-to-date matters of law for insolvency specialists everywhere in the world. Contributors: Nick Segal, Axel Flessner, Lawrence P. King, Ron Harmer, Dan Prentice, Fidelis Oditah, Lynn M. LoPucki, George G. Triantis, Richard F. Broude, Harry Rajak, Theodore Eisenberg, Shoichi Tagashira, Stuart C. Gilson, Ellen L. Hayes, Ian F. Fletcher, Morris G. Shanker, R. H. McLaren, R.C.C. Cuming, Yukiko Hasebe, Susan J. Cantlie, Jacob S. Ziegel, F.H. Buckley, L. S. Sealy, Abe Herzberg, John Farrar, Ronald Daniels, Christopher Grierson, Evan D. Flaschen, Ronald J. Silverman, Koji Takeuchi, Jay Lawrence Westbrook, Donald Trautman, Yasuhei Taniguchi, Douglass Boshkoff, Timothy Powers, Michael Bogdan, Hal S. Scott, Judge James L. Garitty, Jr., Justice James Farley, Justice R. A. BlairZiegel, Jacob S. is the author of 'Current Developments in International and Comparative Corporate Insolvency Law' with ISBN 9780198258964 and ISBN 0198258968.