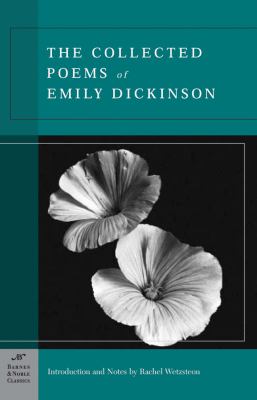 From Rachel Wetzsteon's introduction toThe Collected Poems of Emily Dickinson Emily Dickinson, writing to the editor Thomas Wentworth Higginson in July 1862, reported that she "had no portrait," but offered the following description in place of one: "Small, like the Wren, and my Hair is bold, like the Chestnut Bur--and my eyes, like the Sherry in the Glass, that the Guest leaves--Would this do just as well?" (Selected Letters, edited by Thomas H. Johnson, p. 175; see "For Further Reading"). Despite Dickinson's claim, we do possess one photograph of her--a daguerreotype taken in 1847 or 1848, when she was in her late teens. The image certainly confirms her self-portrait: Her frame is tiny; her shiny hair does indeed sit boldly atop her head; and her dark eyes really do glisten like liquor at the bottom of a glass. The photograph also suggests many of the rich puzzles and paradoxes that have informed our view of Dickinson since the last decade of the nineteenth century, when readers and critics began to read, study, and obsess over her poems. Dickinson's body, with its delicate hands and slender torso, may resemble the fragile form of someone too weak to venture far from home; but her huge moist eyes stare at us with the wisdom, depth, and longing of a woman who has traveled around the world and come back with stories, not all of them fit for mixed company. She demurely clutches a bouquet of flowers, and a book rests primly at her side; but her full, sensuous lips reveal a person whose thoughts may not always tend toward such tidy subjects as flowers and books. We look away from the photograph intrigued and stirred: What's going on in her mind? How could this slight figure be the author of some of the most passionate love poems, the most searing descriptions of loss, the most haunting religious lyrics ever written? Emily Elizabeth Dickinson was born in Amherst, Massachusetts, on December 10, 1830, the middle child of Edward and Emily Norcross Dickinson; her brother, Austin, was born in 1829 and her sister, Lavinia, in 1833. Her father, a lawyer, served as treasurer of Amherst College (her grandfather was a co-founder of the college), and also occupied important positions on the General Court of Massachusetts, the Massachusetts State Senate, and the United States House of Representatives. "His Heart," Dickinson wrote in a letter, "was pure and terrible and I think no other like it exists" (Letters, p. 223). He was strictly religious (something she would later rebel against), leading the family prayers every day and often censoring her reading; but he also ensured that Dickinson grew up in a household surrounded by books and heated intellectual debates. Her mother was a more shadowy presence; Dickinson wrote that she "does not care for thought" (Letters, p. 173);more harshly, she claimed, "I never had a mother. I suppose a mother is one to whom you hurry when you are troubled" (Letters, vol. 2, p. 475).Even so, the Dickinsons remained an extremely close-knit family; after her brother, Austin, married, he and his wife settled right next door. Dickinson attended the coeducational Amherst Academy from the ages of ten to seventeen, and then went on to the Mount Holyoke Female Seminary (now Mount Holyoke College) in nearby South Hadley. She blossomed there into a social and spirited young woman. The most significant event of her stay occurred at a fundamentalist Calvinist revival meeting, when she was asked to stand and declare herself a Christian and refused. After one yWetzsteon, Rachel is the author of 'Collected Poems Of Emily Dickinson', published 2003 under ISBN 9781593080501 and ISBN 1593080506.