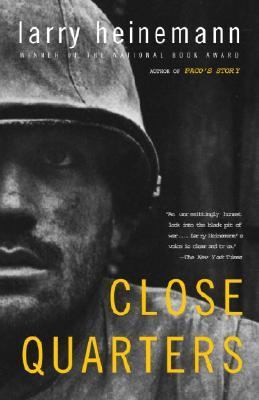 UGLY DEADLY MUSIC I stood stiffly with my feet well apart, parade-rest fashion, at the break in the barbed-wire fence between the officers' country tents and the battalion motor pool. My feet and legs itched with sweat. My shirt clung to my back. My shaving cuts burned. I watched, astonished, as the battalion Reconnaissance Platoon, thirty-some men and ten boxy squat-looking armored personnel carriers--tracks, we called them--cranked in from two months in the field, trailing a rank stink and stirring a cloud of dust that left a tingle in the air. One man slowly dismounted from each track and led it up the sloped path from the perimeter road, ground-guiding it, walking with a stumbling hangdog gait. Each man wore a sleeveless flak jacket hung with grenades, and baggy jungle trousers, the ones with large thigh pockets and drawstrings at the cuffs. The tracks followed behind like stupid, obedient draft horses, creaking and clacking along, and scraping over rocks hidden in the dust. There were sharp squeaks and irritating scratching noises, slow slack grindings, and the throttled rap of straight-pipe mufflers, all at once. And the talk, what there was, came shouted and snappy--easy obscenities and shit laughs. It was an ugly deadly music, the jerky bitter echoes of machines out of sync. A shudder went through me, as if someone were scratching his nails on a blackboard. The men walking and the men mounted passed not fifteen feet in front of me. A moult, a smudge of dirt, and a sweat and grit and grease stink covered everything and everyone--the smell of a junkyard in a driving rainstorm. Each man looked over, looked down at me with the blandest, blankest sort of glance--almost painful to watch--neither welcome nor distance. This one or that one did signify with a slow nod of the head or an arch of the brows or a close-mouthed sigh, and I nodded or smiled back, but most glanced over dreamily and blinked a puff-eyed blink and glanced forward again. The tracks, flat-decked affairs with sharply slanted fronts and armor-shielded machine guns (one fifty-caliber and two smaller M-60s), were painted o.d.--olive drab, a dark tallow shade of green--with large dun-colored numerals, faint and scratched but plain. The smooth straight sides and some of the curved gun shields bore thin bright gouges from Chicom claymore hits and deflected small arms. The confusion of scratches and scrapes was as wonderful and brutal as fingernails dragged across the nap of velvet. Some of the tracks had nicknames: "Lucky Louie" and "Stone Pony" and "White Hunter" and "One Bad Cat" and "The Kiss-off" and "Scratch \ \ " Body count. That summer the number would become fifteen and later twenty-six, and later still we would lose count and give up the counting, saying among ourselves, "Who fucken cares?" The last track, the seven-seven, pulled into the motor pool, towing the very last, the seven-six. The seven-seven left the seven-six near the mechanics' quonset and pulled up and parked with the rest. A pathetic, odd moment of stillness settled over us as it finally shut down. Thick waves of engine heat rose through all the chicken-wire grillwork. The ground guides stood in front of the tracks, motionless and stoop-shouldered in ankle-deep ocher silt. The men still mounted, the drivers and gunners and TCs--track commanders--gazed at their hands or wiped dusted faces with dusted arms or stared down the broad slope at the rubbertree woodline across from the perimeter wire, squinting darkened, puffy eyes. With the tracks facing me on line I saw that all the machine guns--ten fifty-calibers and twenty M-60s--were still loaded and pointing down. It was the frankest kind of gesture. Down where the terror would be, pointing always at the closest trees, the likeliest part of a hedgerow, the nearest rice-paddy dikes, which everyone called berms. The driver of the downeHeinemann, Larry is the author of 'Close Quarters Library Edition', published 2005 under ISBN 9781400076840 and ISBN 1400076846.