Beowulf and Other Old English Poems

by Hieatt, Constance B., Hieatt, A. Kent 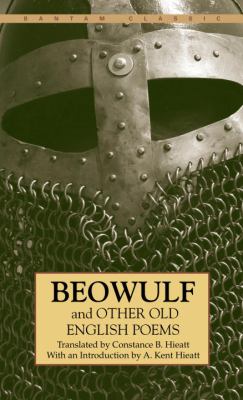 by Hieatt, Constance B., Hieatt, A. Kent

Hieatt, Constance B., Hieatt, A. Kent

PROLOGUE: The Founding of the Scylding Dynasty Indeed, we have heard of the glory of the great Danish kings in days of old and the noble deeds of the princes. Scyld Scefing often drove troops of enemies from their mead-hall seats; he terrified the lords of many tribes, although he had once been a destitute foundling. He found consolation for that: he prospered under the heavens, and grew in glory, until every one of his neighbors over the sea had to obey him and pay tribute. That was a good king. Then a son was born to him, a child in the house, sent by God to help the peoplehe saw the distress they had suffered before when they were without a ruler for a long time. Therefore the Lord of life, Ruler of heaven, granted worldly honor to the son of Scyld. Beowulf was famous; his renown spread far and wide in the land of the Danes. A young man should do as he did, and with splendid gifts from his father's store win loyal companions who will stand by him in old age and serve the people when war comes. He who does praiseworthy deeds will prosper everywhere. Scyld departed from him at the fated time: the mighty man went into the keeping of the Lord. His own dear retainers bore away the beloved king, who had governed them so long, to the current of the sea, as he himself had ordered while he could still use words. There in the harbor stood a ring-prowed ship, covered with ice and ready to set out; it was a craft fit for a prince. They laid their dear lord, the giver of rings, in the bosom of the ship; they put the glorious one by the mast. Many treasures and precious things from far away were brought therenever was a ship more beautifully equipped with armor and weapons of war, swords and coats of mail. On the dead lord's bosom lay a multitude of treasures that were to go far with him in the power of the flood; nor did they give him less valuable treasure than did those who first sent him forth, alone over the waves, when he was a child. They set a golden banner high over his head; then they gave him to the sea and let the water carry him away. Their spirits were saddened, their hearts mournful. Men on earth, even the wisest of counselors, do not know how to tell who truly received that cargo. PART I: The Cleansing of Heorot Heorot Is Built and Assaulted by the Monster Grendel 1 When the prince his father was gone, Beowulf, son of Scyld, reigned over the people; he was renowned among nations for a long time. To him in turn was born high Healfdene, who rules the Danes gloriously as long as he liveda venerable leader, fierce in battle. To Healfdene, the leader of hosts, four children all told were born into the world: Heorogar and Hrothgar and Halga the Good, and a daughter, who, they say, was Onela's queenconsort of the Swedish king. Then Hrothgar was granted success in battle and glory in war, so that his friends and kinsmen obeyed him willingly, and his band of warriors grew large. It came into his mind to order a great mead-hall built, one which the children of men should hear of forever; there he would give out all that God gave him (except the public land and the lives of men) to young and old. I have heard that he then ordered work to adorn the building from nations far and wide throughout this earth. The time soon came when the greatest of halls was quite ready, and the ruler whose word was widely respected gave it the name of Heorot. He did not forget his promise to give out rings and treasures at the feast. The hall towered, high and wide-gabled: it awaited the hostile flames of hateful fire. The time had not yet come when deadly hate would arise between a son and father-in-law after a deed of violence. This was a time of suffering for the powerful demon who dwelt in darkness, when he heard loud rejoicing in the hall every day. There was the sound of the harp and the sweet song of the minstrel, who toldHieatt, Constance B. is the author of 'Beowulf and Other Old English Poems', published 1988 under ISBN 9780553213478 and ISBN 0553213474.