Anna of All the Russias A Life of Anna Akhmatova 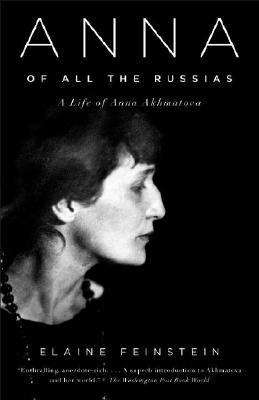 St. Petersburg 1913 The whole mournful city was drifting Towards a destination nobody guessed. AKHMATOVA Let me begin in 1913. The dark and glittering verses which open Akhmatova's Poem Without a Hero circle about her memories of that year, the final moments of a corrupt and glamorous world. In the poem, Akhmatova is waiting for guests to celebrate New Year 1941. Candles have been lit, wine and crystal set out when, instead of her expected visitors, a sinister phantasmagoria of dead friends crowd in upon her, dressed as mummers. Their presence calls up St. Petersburg as it once was, when Akhmatova was twenty-four, a fashionable young woman already famous as a poet, with the violent upheavals of the twentieth century not yet under way. In 1913 St. Petersburg was an Imperial capital, with a black and yellow flag flying over the Winter Palace, private carriages pulled by thoroughbred horses with footmen in uniform who rode on the running-boards. There were trams and trolleys and occasional motor cars. Enticing shop windows on the Nevsky Prospekt had oysters from Paris, lobsters from Ostend and "fruitcakes, smelling salts, Pears soap, playing cards, picture puzzles, striped blazers . . . and football jerseys in the colours of Oxford and Cambridge." On the sunny side of Nevsky Prospekt bookstores sold the latest poetry. Built below sea level, at the edge of the Baltic, St. Petersburg was always an unnatural city. Thousands of slave labourers died of disease and hunger to realise Peter the Great's grand design of a window on the West. Even after he had declared St. Petersburg his new capital, wolves boldly entered the city at night as late as 1712, and occasionally devoured their prey in broad daylight. Floods constantly overwhelmed the islands, and in 1721 Peter himself was nearly drowned on Nevsky Prospekt. It is the city of Pushkin's "Bronze Horseman," where a poor clerk's lover is carried away by the waters and Falconet's grand statue of Peter pursues him when he dares to protest. It was Gogol's city of shadows and phantoms. The poverty and squalor of the streets and squares still remained much as in Dostoevsky's nightmare vision. Akhmatova called St. Petersburg her cradle, even though she was not born there. In her autobiographical jottings, she describes childhood streets filled with organ-grinders, Tatar ragmen and tinsmiths, the houses painted different shades of red, front entrances scented with the perfume of ladies and the cigarettes of passing gentlemen, back staircases smelling of coffee, bliny, mushrooms and, frequently, cats. 1913 was the Jubilee of three hundred years of the Romanov dynasty, and in February all the main streets of the city were decorated, statues garlanded and portraits of a long line of tsars pasted to the front of buildings. Everything was done to impress foreign and provincial visitors. Electricity illuminated the Winter Palace, the golden spire of the Admiralty arch, other columns, arches and double-headed eagles. The rich dressed with flamboyance. At one opera house, in 1913, for a performance of Glinka's patriotic A Life for the Tsar, the boxes blazed with jewels and tiaras. For the nobility, most of whom lived on or near the Nevsky Prospekt, there were balls and banquets. Everywhere military music celebrated the absolute rule of Nicholas II, and the magnificence of his empire. On the February day which inaugurated the Jubilee celebrations, the Imperial family drove in an open carriage towards Kazan Cathedral. To protect the Tsar on his first public appearance since the revolution in 1905, one battalion of horse guards rode in front of his carrFeinstein, Elaine is the author of 'Anna of All the Russias A Life of Anna Akhmatova', published 2007 under ISBN 9781400033782 and ISBN 1400033780.