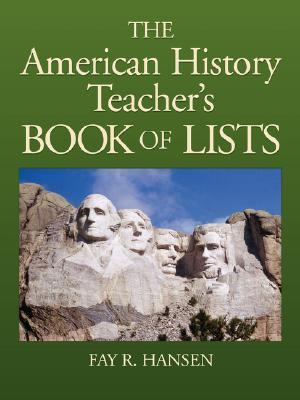 This unique information source and time-saver for U.S. history and social studies teachers is packed with over 325 useful lists for developing instructional materials and planning lessons for students from the fifth through the twelfth grades. For quick access and easy use, all of these lists are organized into six parts, grouped by topic and sequenced chronologically within each section, and printed in a big 81/2" x 11" lay-flat binding that can be photocopied as many times as required for individual or group instruction. Here are just a few examples of the interesting and challenging information you'll find to enrich and enhance your American history and social studies classes: Beginnings features 43 lists covering early populations and explorers, natural history, the colonies, Puritanism, the American Revolution, expansion, the Constitution and early political documents. Lists start with Pre-Columbian Population Groups of North America, move on to Chronology of the 1600s and 1700s and Colonies and Founders, and conclude with Major Battles in the Revolutionary War and the War of 1812. Political History includes 54 lists focusing on the presidency, cabinet departments, federal agencies, electoral politics, Congress and congressional leaders, the judiciary, Supreme Court cases, balance of powers and state government. Examples include Presidential Elections, Important Supreme Court Cases, Steps in the Legislative Process, and Chronology of the Watergate Crisis. Diplomacy and Military History provides 66 lists featuring foreign relations, treaties, slavery and the Civil War, 19th century conflicts, World Wars I and II, the Korean, Vietnam and Persian Gulf Wars, the United Nations, the armed forces, major weapons, and military costs. Lists range from American Nobel Peace Prize Winners and United Nations Secretaries General to Spies and Espionage and Chronology of the Development of the Atomic Bomb. Economic History presents 57 lists that track industrial and technological development, the Great Depression, The New Deal, the public debt and deficits, economic growth, inflation, employment, the work force, trade unions, business leaders and corporations. Examples include Major Industrial and Technological Inventions and Achievements, Ten Largest Banks, Wealthiest Americans, Women in the Work Force, and Ten Industries and Occupations with Fastest Employment Growth, 1996-2006. Social History offers 71 lists covering population trends, urbanization, income trends, poverty, public health, education, crime rates and the prison system, ethnic groups, the civil rights movement, the women's rights movement, American Indian populations, notable families and religious life. The lists range from Urban Populations in 1800 and Most Popular Given Names, 1880-1997 to Major Events in the Civil Rights Movement and American Indian Tribes with Populations Greater than 30,000. Intellectual and Cultural History gives you 42 lists focusing on American writers, visual arts, academic disciplines, performing arts, radio and television, popular music and public libraries. For example, lists such as Major Scientific Discoveries and Important American Architects are balanced with Best Sellers in the 1960s, to offer a glimpse of the culture of that decade, and Protest Songs of the 1960s and 1970s and Most Played U.S. Jukebox Singles of All Times, to spark interest and add fun. In short, The American History Teacher's Book of Lists places in your hands an unparalleled source of good examples, teachable content, teaching ideas and activities that might otherwise take many years and much effort to acquire.Hansen, Fay R. is the author of 'American History Teacher's Book of Lists' with ISBN 9780130925725 and ISBN 0130925721.