All Children Can Learn Lessons from the Kentucky Reform Experience 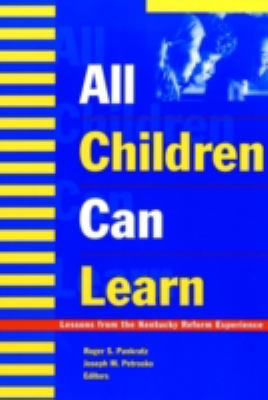 "When the Kentucky Supreme Court ruled that the state's public school system was unconstitutional, it set in motion forces that altered the nature and quality of education, not only in Kentucky but in the entire country. Here is a fascinating story of a critical episode-a determined legislature, skilled education leadership, and sometimes just plain luck-that everyone interested in education should read." -Frank Newman, visiting professor of public policy and sociology, Brown University, and Julius and Rosa Sachs Lecturer, Teachers College, Columbia University "The comprehensive and far-reaching reforms in Kentucky have been watched more than those in any other state. This book contains contributions from some of the most knowledgeable watchers-key researchers who have been following the state's progress and judging its reform results. It's an important book for everyone interested in state education policy and its effects on practice." -Susan H. Fuhrman, dean, Penn Graduate School of Education, University of Pennsylvania "As a comprehensive look at Kentucky's systemic education reform, All Children Can Learn is crucial reading for everyone engaged in trying to make public school reform work, as well as for anyone who doesn't think reform can work. This book thoughtfully examines Kentucky's dramatic initiatives to change schools statewide, providing guideposts for the next school district or state brave enough to undertake large-scale education change." -Pascal D. Forgione, superintendent, Austin Independent School District In 1990, Kentucky passed the Kentucky Education Reform Act (KERA), a landmark statute emerging from a Supreme Court decision that declared the state's K-12 education system to be inadequate, inequitable, and inefficient. The law established a new department of education, mandated statewide learning goals and performance assessments, and provided local schools with new authority over curriculum, instructional practice, and scheduling. In addition, this law equalized funding across school districts, provided direct assistance to schools with declining test scores, and created a new system of school governance that involved principals, teachers, and parents. Now educators, school board members, and policymakers can refer to a single volume for key lessons from the nation's most comprehensive and longest-running school reform model. Written by a nationally prominent group of educators, researchers, and policy analysts, All Children Can Learn presents important research findings from the Kentucky reforms, examines major program elements, and analyzes initiatives that worked or didn't work. Throughout the book, the authors explore the challenges of implementing statewide school change initiatives, offer sound advice for overcoming reform hurdles, and share valuable recommendations for future policy and practice. Reform-minded educators from every type of community will find valuable insights as they contemplate similar changes. From professional development to parent/community outreach, All Children Can Learn shows that America can indeed create better public schools. The Editors Roger S. Pankratz is professor and former associate dean in the College of Education and Behavioral Sciences at Western Kentucky University and director of the Renaissance Group Institution's Partnership for Improving Teacher Quality. During the design of KERA, he served as executive director of the Governor's Council for School Performance Standards, and later as executive director of the Kentucky Institute for Education Research, an independent nonprofit agency created to study and evaluate Kentucky's school reform initiatives. Joseph Petrosko is professor of education at the University of Louisville, codirector of the University of Louisville Nystrand Center of Excellence in Education, and codirector of the Kentucky Institute for Education Research.Pankratz, Roger S. is the author of 'All Children Can Learn Lessons from the Kentucky Reform Experience', published 2000 under ISBN 9780787955236 and ISBN 078795523X.

3 from $5.60
Loading marketplace prices 3 copies from $5.60 How does the rental process work?
View more