Agee on Film Criticism and Comment on the Movies 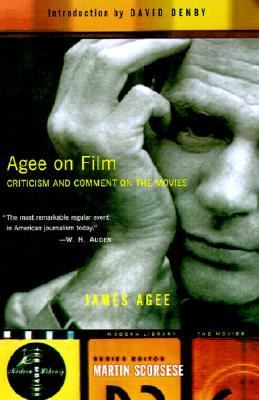 The item you're looking for is currently unavailable.

The Nation 1942-1948 In the fall of 1942, James Agee was asked to do a movie column for The Nation. Margaret Marshall, then Literary Editor gave him free rein to cover what be wanted and to write as be pleased. As a result of her understanding attitude, the reviews became the highly personalized expression Of an extremely gifted and sensitive American artist. DECEMBER 26,1942 I would like so to use this column about moving pictures as to honor and discriminate the subject through interesting and serving you who are reading it. Whether I am qualified to do this is an open question to which I can give none of the answers. But I can begin by describing my condition as a would-be critic. I suspect that I am, far more than not, in your own situation: deeply interested in moving pictures, considerably experienced from childhood on in watching them and thinking and talking about them, and totally, or almost totally, without experience or even much secondhand knowledge of how they are made. If I am broadly right in this assumption, we start on the same ground, and under the same handicaps, and I qualify to be here, if at all, only by two means. It is my business to conduct one end of a conversation, as an amateur critic among amateur critics. And I will be of use and of interest only in so far as my amateur judgment is sound, stimulating, or illuminating. That my own judgment, and yours, is that of an amateur, is only in part a handicap. It is also a definition. It can even be an advantage, of a sort, in so far as a professional's preoccupation with technique, with the box-office, with bad traditions, or simply with work, can blur, or alter the angle of, his own judgment. I would talk to even so good a director as John Ford, for instance, with deep respect for him as a technician and as a serious man, but I might at the same time regret ninety-nine feet in every hundred of The Grapes of Wrath, and be able to specify my regret; and it would be a question entirely of the maturity of my judgment, and not in the least of my professional or amateur standing, whether I were right or wrong. If I were a professional, on the other hand, my realization of the complexity of making any film would be so much clarified that I would be much warier than most critics can be in assigning either credit or blame. Indeed, if you could follow out all the causes of that sort of high-serious failure, you would be involved as much in the analysis of an industry, a form of government, and the temper of a civilization, as in the analysis of a film. As an amateur, then, I must as well as I can simultaneously recognize my own ignorance and feel no apology for what my eyes tell me as I watch any given screen, where the proof is caught irrelevant to excuse, and available in proportion to the eye which sees it, and the mind which uses it.Agee, James is the author of 'Agee on Film Criticism and Comment on the Movies' with ISBN 9780375755293 and ISBN 0375755292.