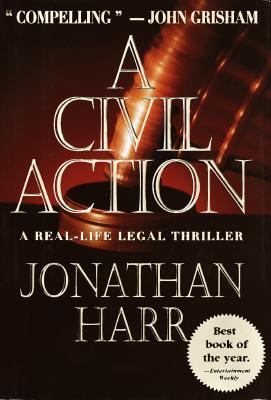 The lawyer Jan Schlichtmann was awakened by the telephone at eight-thirty on a Saturday morning in mid-July. He had slept only a few hours, and fitfully at that. When the phone rang, he was dreaming about a young woman who worked in the accounting department of a Boston insurance firm. The woman had somber brown eyes, a clear complexion, and dark shoulder-length hair. Every working day for the past five months the woman had sat across from Schlichtmann in the courtroom, no more than ten feet away. In five months Schlichtmann had not uttered a single word directly to her, nor she to him. He had heard her voice once, the first time he'd seen her, but he could no longer remember what it sounded like. When their eyes had happened to meet, each had been careful to convey nothing of import, to make the gaze neutral, and to shift it away as quickly as possible without causing insult. The woman was a juror. Schlichtmann hoped that she liked and trusted him. He wanted desperately to know what she was thinking. In his dream, he stood with her in a dense forest, overgrown with branches and roots and vines. Behind the woman were several people whose faces Schlichtmann recognized, the other jurors. The woman was trying to decide which path in the forest to take and Schlichtmann was attempting to point the direction. He beseeched her. She remained undecided. A dream of obvious significance, and unresolved when the phone rang and Schlichtmann awoke, enveloped by a sense of dread. The man on the phone identified himself as an officer at Baybank South Shore, where Schlichtmann had an automobile loan that was several months in arrears. Unless Schlichtmann was prepared to pay the amount due--it came to $9,203--the bank intended to repossess the car, a black Porsche 928. Schlichtmann had no idea whether or not Baybank South Shore had been paid in the last several months, but on reflection he felt pretty certain it had not. He told the banker to speak with a man named James Gordon. "He handles my financial affairs," said Schlichtmann, who gave the banker Gordon's telephone number and then hung up the phone. Schlichtmann was still in bed twenty minutes later when the phone rang again. This time the voice on the other end identified himself as a Suffolk County sheriff. The sheriff said he was at a pay phone on Charles Street, two blocks from Schlichtmann's building. He had come to repossess the Porsche. "I want you to show me where the car is," said the sheriff. Schlichtmann asked the sheriff to wait for ten minutes. Then he tried to call Gordon. There was no answer. He lay in bed and stared at the ceiling. Again the phone rang. "Are you going to show me where the car is?" asked the sheriff. "I think I will," said Schlichtmann. The sheriff, a large, heavyset man in a blue blazer, was waiting for Schlichtmann at the front door. It was a clear and brilliantly sunny morning in the summer of 1986. From the doorstep, Schlichtmann could see the sun glinting off the Charles River, where the white sails of small boats caught a brisk morning breeze. The sheriff handed him some documents dealing with the repossession. Schlichtmann glanced at the papers and told the sheriff he would get the car, which was parked in a garage three blocks away. Leaving the sheriff at his doorstep, he walked up Pinckney Street and then along the brick sidewalks of Charles Street, the main thoroughfare of Beacon Hill. He walked past several cafes, the aroma of coffee and freshly baked pastries coming from their doorways, past young mothers wheeling their children in strollers, past joggers heading for the Esplanade along the Charles River. He felt as if his future, perhaps even his life, hung in the balance while all around him the world followed a serene course. In the garage bay the Porsche had acquired a fine patina of city grime. Schlichtmann had owned the car for almost twHarr, Jonathan is the author of 'A Civil Action: A Real-Life Legal Thriller' with ISBN 9780394563497 and ISBN 0394563492.